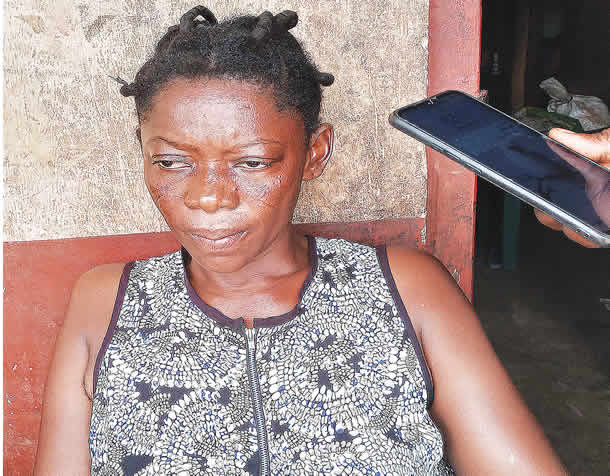 A victim who escaped Fulani herdsmen attack that left over 15 others dead has narrated how the killers of her people boasted while killing villagers.

According to an interview with Punch, Mrs Ngozi Odo-Abuchi a graduate of the National Teachers’ Institute, who works in the Education Department of the Ishielu Local Government Area of Ebonyi State survived herdsmen’s attack on Obeagu community in the Ishielu LGA on Monday last week.

The 49-year-old widow explained her face-to-face encounter with death.

We learnt that you narrowly escaped the herdsmen’s attack on the Obeagu Road. How did it happen? Why did they spare your life?

On Monday, while I was coming home from where I went to, I mounted an okada from their park at the Nkalagu junction to convey me to Obeagu, my hometown. The rider is from the same community but not the same village. We left Nkalagu around 5pm and from Nkalagu to Obeagu is between 30 and 45 minutes with a motorcycle. We passed our junction, Egedegede, and about half way into the town, we saw people wearing black attire and most of them were inside the bush. Because the okada rider was on top speed, he could not stop immediately after sighting those people. And because he was not suspecting anything, he continued.

Unfortunately, when we got to that point, those people swooped on us. We were trying to run, but we didn’t know they had surrounded the entire place and they grabbed us. They started beating us, dragged us into the bush so that nobody could easily see what they were doing from the road. They were hitting us with their machetes on the head and kicking us with their boots. They stabbed the motorcyclist in the stomach and slit his throat. That was how they killed all the men; some of the attackers cut the men’s noses and hands after killing them.

When you got to the Egedegede junction, did you not see the vehicles and motorcycles that were burnt along the road?

They had not done that. It appeared that they started the killing on the road leading to the community. We were the first they stopped and the okada man conveying us was the first person they killed. As other motorcyclists were coming, they continued killing them, while the females were being tortured. After the beating, they would drag them inside the bush and ask them to lie down. They killed all the okada riders, but the women they didn’t kill, but beat us so mercilessly.

Why did they spare all the women and none was killed?

One of them, while they were killing the men, drew his dagger to stab me. Then I was seriously praying and remembering God’s promises to those who entrusted their lives to him. Suddenly, one of their leaders shouted at him: ‘Do not touch the women, they will go and tell their people that this is the consequences of daring to chase Fulani herdsmen out of their community. They will take our message to Nnamdi Kanu that he is doing his Biafra and that he and his IPOB cannot stop us from operating anywhere in the South-East or even South-South. All the heads of security agencies are our people. If they attack any Fulani man in any state, the government security agencies being controlled by our people will go after them, while we will come for reprisal. Tell Nnamdi Kanu of IPOB that he can continue to rant on social media, while we do what we know best.’

What is your experience like in the hands of the herdsmen?

What I saw that evening is better imagined. It was very horrific, but thank God for sparing my life. God is very merciful to me. I was calling the name of Jesus Christ to intervene and save us. While I was praying, I was also quoting the Bible, remembering his promises to those who believe and trust in him. So, as I was praying, one of them said I shouldn’t pray again and close my mouth, but I kept on praying and they kept beating me. One of them raised a dagger to kill me before another one shouted at him to stop and not to kill her or any of the women. There was nothing they didn’t use to torture us; they hit us with machetes; they kicked us with boots and marched upon us.

How long did the operation last?

I don’t know, but I know it started around 6pm and we were there till darkness covered us. After killing people, they started burning motorcycles. So, their attack at that location could have lasted about two to three hours or more, but I can’t be exact, because they collected all our belongings – phones, money and every valuable item, including handbags.

Then, how did you manage to come out alive?

It was a miracle of God really. After they had killed all the men, they gathered some motorcycles and were burning them. At that point, I discovered that they were not close to us and we all ran inside the bush and while we were running, we continued to hide behind trees and the darkness of the night covered us. So, we slept inside the bush until the following morning. In the morning, two of us who ran and hid in the same place trekked back to the scene to see if our belongings were left and some villagers saw us and took us home.

How many were the attackers?

They were many; more than 20. I couldn’t have counted them because some of them were on the road; some were staying with us and beating us, while some were going up and down. Probably, those ones were on surveillance looking for more people and ensuring that they were not repelled. Meanwhile, all of them were bearing AK-47 rifles with double magazines.

Do you know who the assailants were?

They were Fulani men. In short, they told us that they were Fulani; that they came to show us that since our people pursued them out of our community, they wanted to give us a parting gift.

Is your community having problems with herdsmen?

Yes. They used to take their cows into our farms and destroy crops. They harvest yams and cassava and use them to feed their cows; when our people complained, they would tell us that it wasn’t their cows that destroyed the crops. So, this year, our people asked them to leave our community so that we could return to the farm. You drove to this place, from that Egedegede junction to this town is about 15 kilometres and I am sure you didn’t see any side of the road that was cultivated and that is because when we cultivate, the herdsmen will bring their cows and destroy it.

Our land is lying fallow, while hunger is killing people, because they can’t go to farm. So, our people said since you could not cohabit with us in peace, it was better you relocate to another place. So, after that, a few weeks ago, the people they occupied their land now drove them out.

What did they tell you was the reason they came to kill your people?

They said our people killed their cows and today we must pay with our lives. Like I told you earlier, they said we were agitating for Biafra and that we would see if that would save us; that Nnamdi Kanu was just making a noise. They also said any community in the South that a Fulani was attacked or their cows killed, after using security agencies that their people control to ensure that the cows were paid for, they would attack the community. They told us to go and tell the chairman of the local government council that the attack they carry out won’t go to the Internet, but the one we carry out would be uploaded on the Internet immediately.

What language were they speaking?

Did you have a premonition of the incident?

Yes. I had a revelation of this incident but it was about a month now. I saw it happened to me and since then, I had been praying against it until it was made manifest on that Monday. Before, I was watching on the television how people were being slaughtered, but it was during the attack that I saw it with my eyes. It is only the grace of God that I survived the attack. It is callous, inhuman and atrocious.

Since the incident happened, have the police or any other security agency or government officials visited you to ask you how it happened?

None of those you mentioned has visited me. It is only some community members and my relations who are coming to check on me and ask how it happened.