Angelina Renee Jimenez and Refugio Jimenez are charged with manslaughter in the deadly El Dorado fire after authorities say their gender reveal sparked the blaze.

“Obviously, he wouldn’t have been out there if this hadn’t started in the first place. He’s fighting a fire that was started because of a smoke bomb. That’s the only reason he’s there,” District Attorney Jason Anderson said about Morton at a press conference announcing the charges.

Here’s what you need to know about Angelina Renee Jimenez, Refugio Jimenez and the El Dorado fire:

1. Authorities Say a Pyrotechnic Used by the Couple at a Gender Reveal Party at El Dorado Ranch Park in Yucaipa Sparked the Blaze That Burned 22,680 Acres

GettyEmbers fly off burning timber as flames push towards homes during the El Dorado Fire.

Angelina and Refugio Jimenez are accused of starting the massive wildfire, which eventually burned more than 22,680 acres, during a gender reveal party at El Dorado Ranch Park in Yucaipa, California, on September 5, 2020, according to the press release from the San Bernardino County District Attorney’s office. “Mr. and Mrs. Jimenez used a smoke bomb to reveal the gender of their pregnancy,” the release said.

According to The Associated Press, the pyrotechnic was set off in a field and the dry grass was quickly ignited. The couple tried to extinguish the flames with a bottle of water and then called 911, the AP reported. The fire was then stoked by strong winds and it spread across the national forest land, according to the AP. According to The Desert Sun, the couple was at the park along with their young children and someone to record video of the reveal.

The California Department of Forestry and Fire Protection said in a September 2020 statement, “CAL FIRE Law Enforcement has determined the El Dorado Fire, burning near Oak Glen in San Bernardino County, was caused by a smoke generating pyrotechnic device, used during a gender reveal party. The fire began at 10:23 am on September 5, 2020 in the El Dorado Ranch Park in Yucaipa. The fire spread from the park to the north on to Yucaipa Ridge that separates Mountain Home Village and Forest Falls from the City of Yucaipa. CAL FIRE reminds the public that with the dry conditions and critical fire weather, it doesn’t take much to start a wildfire. Those responsible for starting fires due to negligence or illegal activity can be held financially and criminally responsible.”

Anderson said in a statement, “Due to enormity and impact this conduct had on our community, the number of agencies involved, the expertise required in these types of cases and to maintain the integrity of due process and review within the criminal justice system, our Office decided to present the case to the grand jury. Over four days, Ms. Gregory and Ms. Crane called 34 witnesses, obtained evidence requested by the Grand Jury and admitted 434 exhibits. This evidence was the basis of the indictment against the defendants that was unsealed today. There is a total of 30 charges containing 22 victims.” 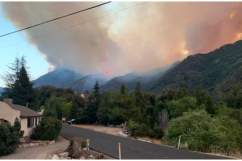 2. Firefighter Charles Morton, a Big Bear Interagency Hotshot Squad Boss, Was Killed When He Was ‘Burned Over’

The fire burned in San Bernardino and Riverside counties until it was contained on November 16, 2020. Big Berar Interagency Hotshot Squad Boss Charles Morton was killed on September 17. Prosecutors say 13 people, including two other firefighters, were injured, thousands were evacuated from their homes and many people were displaced. The fire destroyed five homes and damaged 15 other buildings, authorities said. The family issued a statement saying, “Charlie is survived by his wife and daughter, his parents, two brothers, cousins, and friends. He’s loved and will be missed. May he rest easy in heaven with his baby boy.”

Morton, 39, was a firefighter for 14 years. U.S. Forest Service Chief Vicki Christiansen said in a statement, “Charlie was a well-respected leader who was always there for his squad and his crew at the toughest times. Our hearts go out to Charlie’s loved ones, coworkers, friends and the Big Bear Hotshots. We will keep them in our thoughts and prayers.”

According to the Los Angeles Times, Morton was killed when he was “burned over,” meaning the wildfire reached an area where he was working and he was not able to escape.

“The El Dorado fire burned through 22k acres, resulting in the death of US. Forest Service Wildland Firefighter Charles Morton, injured two additional firefighters, loss or damage of residential buildings, and displaced several local communities and residents across San Bernardino and Riverside counties,” Anderson said in a statement. “I would like to extend my condolences to the family and loved ones of U.S. Firefighter Charles Morton. No less than 6 agencies were involved in containing, extinguishing, and investigating the El Dorado Fire. I would like to personally thank the United States Forest Service, Cal Fire, the San Bernardino County Fire Department, the San Bernardino County Sheriff’s Department Homicide Division and the City of Yucaipa for their investigative efforts in this case. I would also like to thank Supervising DDA Jill Gregory and Major Crimes DDA Lisa Crane for presenting this case to the Grand Jury.”

3. Refugio & Angelina Jimenez, Who Are Both San Bernardino Residents, Pleaded Not Guilty During the First Court Appearance

Refugio and Angelina Jimenez are residents of San Bernardino, according to online records. Little other information about them has been made available. They both appeared in court for the first time on July 20, 2021, for their arraignment, according to San Bernardino County records. They pleaded not guilty to all of the charges.

The couple could not be reached for comment by Heavy and attorneys listed in online records as representing them in court have also not commented. They are both scheduled to return to court on September 15, 2021, online records obtained by Heavy show.

The district attorney said in a statement, “Finally, I want to thank the public for their patience as this case was investigated and reviewed. I am aware that members of the community, at times, may have been frustrated at the pace of our Office’s review and response on this case. Given the scope and impact of the El Dorado Fire on the land and lives of so many, particularly Charles Morton and his family, it was imperative that every investigation be completed within both Federal and State agencies to provide a full and fair presentation to the members of our community that made up the criminal Grand Jury.”

4. Angelina & Refugio Jimenez Both Face Up to 20 Years in California State Prison If They Are Convicted of Manslaughter

GettyA firefighter douses flames as they push towards homes.

Angelina and Refugio Jimenez face up to 20 years in state prison if convicted of the charges against them, according to prosecutors. Video of the gender reveal has not been made public. It has not been reported if Angelina Jimenez gave birth to a boy or a girl or when she was due.

“They lit that device. It produced smoke, which ignited the season grasses that was immediately adjacent. That grass immediately spread across to Yucaipa Ridge and then eventually to Oak Glen,” CalFire Captain Bennet Milloy told KESQ. “Even though it’s accidental, it could be considered as ‘reckless.’ In California if it is deemed ‘reckless’ they could be found criminally liable for burning the wild lands, the homes, the vehicles that were burned during that. CalFire is not looking at this at the moment but they could be civilly responsible for the suppression costs after the fire.”

Milloy added, “I could imagine this is a terribly traumatic experience for them, they were going to have a happy family moment, that obviously went terribly wrong.”

5. They Are the Latest Parents to Be Charged in Gender-Reveals Gone Wrong

There have been several incidents in recent years of gender reveals that have led to fires, arrests or tragedies. In 2017, U.S. Border Patrol agent Dennis Dickey shot an explosive target, sending blue smoke into the air and sparking the Sawmill Fire in Arizona. The blaze burned more than 45,000 acres and caused more than $8 million in damage. Dickey pleaded guilty to criminal charges and was fined, but not sentenced to prison time, but there were no injuries or fatalities in that fire.

In May 2021, a New Hampshire man, Anthony Spinelli, was charged with disorderly conduct after an explosion at a gender reveal party terrified nearby residents, NBC Boston reported. No one was injured.

Milloy, a CalFire spokesman, told The New York Times in September 2020 about the Jimenezes, “I can’t speak on their behalf, but personally, I can only imagine how terrible they have to feel for a lot of reasons.”