In a new interview, the SUR owner dissed her former employee – who was canned from the Bravo reality show due to her past racially insensitive behavior — when talking about how the remaining cast has matured since the series made its debut in 2013.

Schroeder and several other “Vanderpump Rules” alums recently became first-time moms, but that didn’t stop LVP from recalling the “Next Level Basic” author’s past days as a wild child.

Here’s what she said:

In an interview with Radar Online, Vanderpump referenced the firings of Schroeder and her partner in crime, Kristen Doute, as well as the exits of Jax Taylor and Brittany Cartwright from the Bravo reality show.

She noted that the remaining cast – which includes Tom Sandoval, Scheana Shay, and Lala Kent – had finally grown up.

After noting that “having babies didn’t change them,” Vanderpump talked about the new season, which will be sans Schroeder.

“I think some of the issues maybe are a little deeper, but I think as you mature and the friendships get older and more mature…they also become more intense. There’s more at stake,” Vanderpump said. “So I don’t think you care less, I just think you maybe have slightly more in-depth conversations about it rather than just chucking a drink at somebody and shouting, ‘It’s my birthday!’”

Vandeprump was clearly referencing Schroeder with the “birthday” comment. Longtime “Vanderpump Rules” fans know that Schroeder always made a big deal about her June birthday and demanded that it be celebrated on camera. The bratty birthday behavior is so notorious that there are numerous GIFs floating around that reference it.

Vanderpump’s shady comment about Schroeder came just as the new mom shared a photo of her posing with her “VPR” friends and their babies and joking that they “used to pose with cocktails.”

As for her most recent birthday,  Schroeder and her husband Beau Clark, and their baby daughter Hartford Charlie Rose traveled to Las Vegas with pals Jax Taylor and Brittany Cartwright and their newborn son Cruz Michael Cauchi. The group dubbed the trip a “baby-friendly” Vegas birthday celebration for Schroeder. 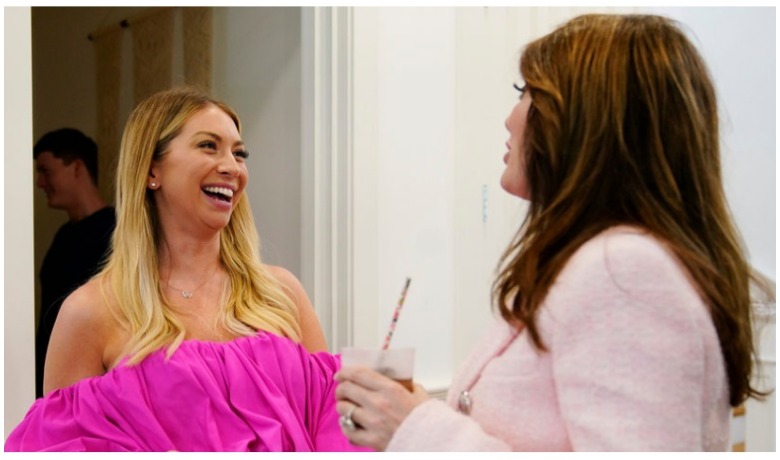 Despite the recent diss, Vanderpump recently said all is good between her and Schroeder. While speaking with Us Weekly, the California restaurant owner confirmed that she reached out to Schroeder to no avail after her firing, and then finally came face to face with her out in public.

“I actually ran into her,” Vanderpump told Us. “I did say, ‘Yes, I called you…and I’ve called you and reached out to you.’ And she said ‘Yes, yes you did.’ And she was very friendly.”

“I wish them all well. I do,” Vanderpump added of the fired “Vanderpump Rules” stars. “I also think they needed to learn a lesson about, you know, respecting other people’s point of views and having empathy and looking at other people’s lives, not just through their own lens. Personally, I think a lot of people need to learn that.”

Vanderpump previously said on “The Skinny Confidential’s Him & Her” podcast that Schroeder and her fellow fired co-stars’ past behavior was “stupid and ignorant.”