While much of the focus has been on the moves the New York Knicks made for their 15-man roster, there are several smaller moves fans should also be looking at.

The signing of big names like Kemba Walker and Evan Fournier are going to grab all of the headlines, but what about the moves that go under the radar?

Typically, G-League signings don’t get a lot of attention, but this one could prove to be a big one. The Westchester Knicks, New York’s G-League affiliate, completed a trade that brought former UCLA star Jaylen Hands to the team.

Going into college at UCLA, Hands was a 5-star recruit and a McDonald’s All-American, so there was a lot of hype surrounding him. There are many fans and analysts out there who figured he’d become a huge star, but at 22 years old, the young guard hasn’t been able to lock down a secure roster spot with any NBA team.

He’s shown flashes of star talent, but being a late second-round pick hasn’t done him any favors and he’s still looking for a way to break into the NBA. Perhaps he could get that opportunity with the Knicks.

Westchester Knicks say they’ve acquired Jaylen Hands in a trade with the Long Island Nets in exchange for the returning rights to Bryce Brown.

According to SNY’s Ian Begley, the Westchester Knicks acquired Jaylen Hands in a trade with the Long Island Nets, so he’ll will now be a member of New York’s affiliate.

This trade doesn’t guarantee he’ll get a shot with the New York Knicks, but it does mean he’ll have another opportunity to showcase his talent, at least at the G-League level.

We’ve seen before how important a simple opportunity is for young players, especially for ones that are just oozing with potential.

Hands was a member of the Cleveland Cavaliers’ Summer League roster just a month ago, and he had some flashy moments.

With the Cavs, he averaged 8.6 points, 3.2 assists, 3.0 rebounds, and 17.8 minutes per game. However, something he didn’t showcase a ton of was his 3-pt shooting, and he only took a total of seven shots from behind the arc in the Summer League.

In a game against the Knicks, he put seven points, but shot just 3-10 from the field. He also chipped in five assists and three rebounds in a Cavs loss.

Can Hands Make the Team? 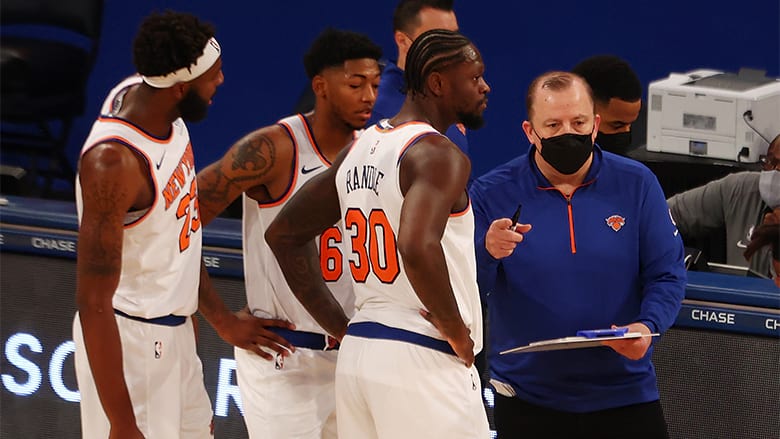 The biggest thing holding Hands back is the fact that the Knicks are so deep at the guard position.

With Derrick Rose, Kemba Walker, RJ Barrett and Immanuel Quickley all vying for minutes, it’ll be hard to fit Hands into the rotation and have him get regular minutes. When you add in Fournier and Alec Burks, it gets even harder to imagine a role for him.

Another thing working against him is the fact that the Knicks plan on going deep into the playoffs this season, so they might not have the minutes available for a developing player.

Recent draft pick Jericho Sims figures to spend a lot of time with the team’s G-League affiliate this season, so perhaps he and Hands will form a fearsome duo in Westchester.

It’s highly unlikely we’ll be seeing Hands in the big leagues this season, but stranger things have happened over the course of a long NBA season.